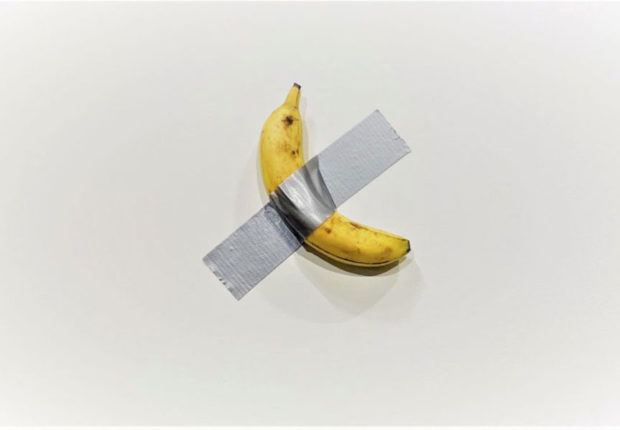 True, Cattelan didn’t make the banana, nor has invented duct tape, at best he just stuck a ripe banana to the wall with duct tape. Later on, some wealthy guy, a provoker just as much as Cattelan is, bought the piece for an amount of money that the vast majority of common mortals couldn’t gather even after thirty years of hard work. It would seem ridiculous, and perhaps it is, as ridiculous as what we do during our lives. And, indeed, that could be the sense of it. The sense of ridicule.

Let me explain. In the last decades art has taken conceptual forms. That is, art is not only a representation of images, figures, real or dreamlike shapes, but also a representation of ideas, metaphorical summary of the world and our lives’ mechanisms. Desecration? Maybe, but also, and above all, summary, or, better yet, symbol. The symbol is, by definition, a summary and, in its highest expression, represents a myth. 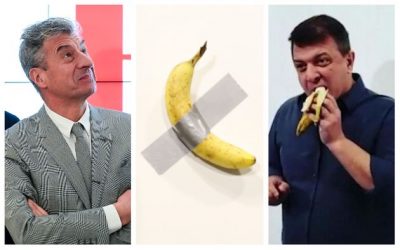 Nowadays, however, the myth doesn’t have the heavy sense it had during millennia, and symbols can’t represent it anymore. Instead of myths, we have false myths reflecting the poverty of thinking that aggrieves us and makes us so vulnerable, hence,  albeit all sorts of artists struggle to recover the sense of myth, what stands out are the actions of the so called “influencers”, they are our new myths: characters to be copied (not images of profound thinking).

And so, the banana represents the false myth, a perishable item that can spoil fast, and if it stays there for long it will fill with worms. The banana, however, is taped to the wall, what sense does it have to leave it there? it is better to eat it, if it is ripe it’s really good. That’s the sense of revolution. The false myth is stuck to the wall with duct tape, the duct tape represents those who idealize the new myth, that is, the people, hence, us.

Then the myth spoils, faster and faster (The reason for the banana, not a pomegranate), unless someone comes to upset the established order pointing out that the false myth can simply be eaten, digested and… I say no more. What happens then, after the banana has been eaten, to those twenty centimeters of duct tape (the people that held the false myth)? They get thrown into the trash, after all there’s still a whole roll that can be used.

It cannot be excluded that Cattelan and the banana eater (who ate a work of art risking serious sanctions) had an agreement, but it doesn’t matter. The experiment was a success and, through absurd actions, it reproduces the sense of ridicule of our misunderstood world and tells us “false myth, you’re a banana that spoils fast. People, you are duct tape that, once used, gets thrown away. Wake up! Revolution is a mad man who eats bananas”.